My father was a photographer for around 35 years and towards the end of the 20th century he purchased a Imacon (now Hasselblad) Flextight Precision II hybrid film scanner. This was back in the days where digital photography wasn’t feasible for quality and film was king. The Flextight allowed him to scan negatives into a digital format at an insane quality (even by most of today’s standards) and then do things like color correction via software, something we take for granted these days.

The problem with this particular film scanner is that it only has a SCSI interface. Remember these were the days before USB became real popular. Additionally, Imacon’s scanning software, FlexColor, was really only supported until Windows XP SP1 came out. Luckily we had a PCI SCSI card laying around so I could free this scanner from the clutches of the dedicated machine he had built for it that has an impressive slot-based 450MHz Intel Pentium II with 384MB of RAM that uses an ISA, yes ISA… that big old brown slot, SCSI interface card.

For this guide I’m using a Adaptec 2906 SCSI PCI card and Windows 7 32bit. Note that any 64 bit Windows will most likely not work. This is a limitation of the scanner’s drivers, not Windows or the FlexColor application itself.

First make sure your SCSI card is installed and the drivers are updated. Make sure you can see it in Device Manager:

Next install the FlexColor software. The last version made for the Precision I/II was 4.0.3. You can currently get this file directly from Hasselblad’s site. How convenient, because honestly who has a CD drive anymore? After the software is installed if you go up to File -> Devices you’ll notice that your scanner is not there and it is also not detected in Device Manager. Turn on your scanner and reboot your computer.

That last part is important. Due to the limits of SCSI and the Precision II being made in an era where plug and play hadn’t really been achievable yet, the scanner will only work if it’s turned on before your computer. In Device Manager now you should see 8 devices named Imacon P2/DTP Scanner SCSI Loader for SCSI. There are 8 of them because there are 8 possible SCSI channels that the scanner can reside on. We have to install the driver for each of these in order for the scanner to function properly. Right click on the first one and click Update Driver Software.

From the two options presented, choose “Browse my computer for driver software”. In the FlexColor applications directory there is a folder called INF that contains our driver. Browse to that folder and hit next. 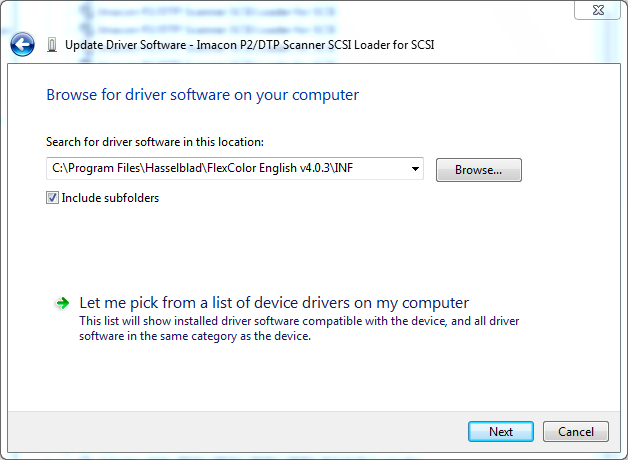 It will ask you if you want to install an unverified driver. That’s okay. This thing was made before driver signing was actually considered! For the next 7 in the list go through and do Update Driver Software again. This time, use the automatic search option. Reboot your computer, start FlexColor, and you should see your scanner in File -> Devices now! You should now be able to scan your negatives.

Grav was with by Trilby Media.